The actress is seen holding a petrol bomb and flames rising all around her.

LAHORE (Daily Dunya) – A new poster of upcoming war film ‘Yalghaar’ has been released which features Ayesha Umer in an intense appearance.

The actress is seen holding a petrol bomb and flames rising all around her. Social media has since gone abuzz with the new poster which reveals her character name ‘Zarmeena’. 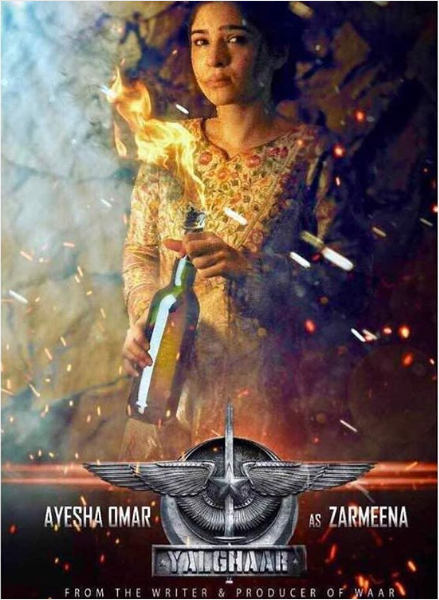 During an interview, Ayesha Umer said that she plays the role of an empowered and struggling girl. Ayesha said that though she appeared for short while, her character will leave long lasting impression on the audience.

“I am not bothered about the number of scenes I have because I know every scene I’ve done will leave an impact,” she said.

The movie is all set to release on Eid-ul-Fitr, this June and includes Shaan Shahid, Ayesha Omar, Humayun Saeed, Adnan Siddiqui, Goher Rasheed, Armeena Rana Khan and Sana Bucha. Directed by Hassan Waqar Rana, the film happens to be Pakistan’s most expensive movie and precedes ‘Waar’. The movie will release all across Pakistan apart from 50 other countries.

Ariana Grande to hold concert in Manchester for bombing victims

When SRK made unusual stealth entry to KJo's birthday bash