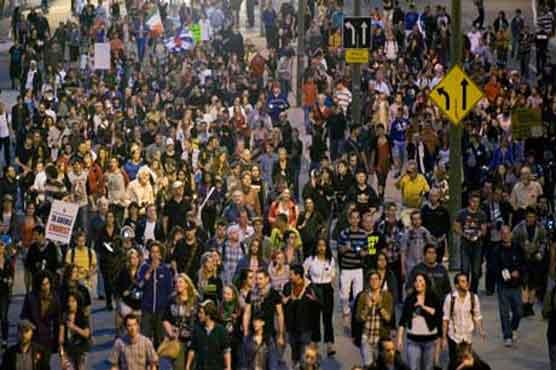 Student representatives and Quebec government officials emerged from a third day of talks.
The talks were aimed at ending weeks of protests over tuition hikes without an agreement after a laborious session aimed at ending weeks of protests.Student groups said they made a new proposal Wednesday to the government and were hoping to get an answer from officials Thursday.We gave our proposal to Quebecs government, we discussed it, we debated it, and the minister of education said she needed the night to think about it, said student leader Leo Bureau-Blouin.Students have called for a tuition freeze, but the government has ruled that out as a possibility. Students also object to an emergency law put in place to limit protests.There was an exchange of offers, a ping-pong game all day and it ended with our last return so were waiting for a reaction tomorrow, said student leader Gabriel Nadeau-Dubois. There have been many proposals on both sides, there were ups and downs.More than 2,500 people have been arrested since a student strike at more than a dozen Quebec colleges and universities began in February.Any agreement would have to be put to the various student associations for approval. The government was hoping to avoid a repeat of previous talks that ended with an agreement in principle with the leaders that was later rejected by the associations.The French-speaking provinces average undergraduate tuition - $2,519 a year - is the lowest in Canada, and the proposed hike - $254 per year over seven years - is tiny by U.S. standards. Analysts say Quebecois are more likely to compare themselves to European countries where higher education is mostly free, rather than to the neighboring United States.Students said a proposal to drop the yearly rise by $35 to $219, was unanimously rejected.Education Minister Michelle Courchesne said Wednesday that efforts were continuing to reach an agreement but the talks seemed laborious.The situation is serious so lets put time on our side, she said Wednesday. Were progressing, its difficult but as I was saying its not over till its over.Protesters in Montreal and Quebec City were joined by demonstrators across the country Wednesday partaking in what a Facebook group called Casseroles Night in Canada, a reference to the pots marchers have been banging to show their support for the students. One posting on the social media page even included a photo of protesters banging pots in Little Rock, Ark.Protesters gathered again outside the building where the talks were taking place in Quebec City, banging pots and waving the flags of unions which have given students their support.Quebec Premier Jean Charest, who has vowed to shake up the debt-ridden provinces finances since he was elected nearly a decade ago, has refused to cave in. But he attended Mondays talks with the students for the first time since the conflict began, after being urged to do so by student leaders.Charests government passed emergency legislation on May 18 restricting protests and closing striking campuses until August. The law requires that police be informed eight hours before a protest begins, saying organizers must provide details on the route of any demonstration of 50 or more people. It also prohibits demonstrations within 50 meters (165 feet) of a college and declares that anyone who incites or helps another person break the new regulations can be fined.Amnesty International says the law breaches Canadas international human rights obligations and called for it to be rescinded by Quebecs legislature.On Wednesday, two United Nations freedom Special Rapporteurs expressed concern about the law and urged federal and provincial governments of Canada and Quebec to fully respect the rights to freedom of peaceful assembly, expression and association of students affected by two new legislations.

That time of the year: Say hello to summer vacations