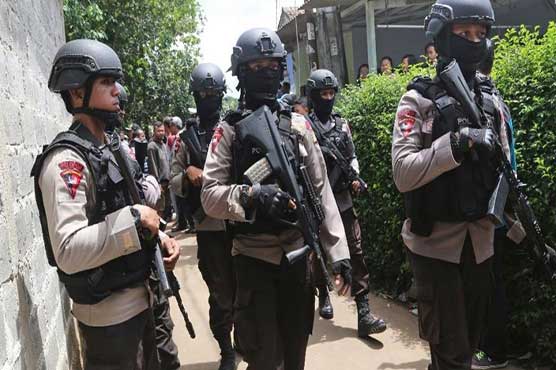 Indonesia has some of the toughest anti-drugs laws in the world.

JAKARTA (AFP) - A Taiwanese man caught with a tonne of crystal meth was shot dead by Indonesian police after he tried to escape, authorities said Thursday.

Lin Ming Hui was among a group of four Taiwanese men found in Banten province -- a couple of hours outside the capital Jakarta -- with 1,000 kilograms of the drug packed in 51 boxes.

Police had begun investigating after receiving a tip-off from Taiwan authorities that drugs had been transported into Indonesia from China, Jakarta police spokesman Argo Yuwono said.

"We caught them last night, but because one of them tried to escape he got shot and died. Two of them are now in our custody, while the fourth man managed to flee and we are now searching for him," Yuwono told AFP.

Indonesia has some of the toughest anti-drugs laws in the world, including capital punishment for traffickers.

Foreigners are regularly caught trying to bring drugs into Bali, a tropical resort island that attracts millions of visitors each year.

Jakarta has stepped up a campaign against drug use and has executed several foreign and Indonesian narcotics convicts by firing squad in the past few years.

Australians Andrew Chan and Myuran Sukumaran were put to death in April 2015 for smuggling around 8.3 kg (18 pounds) of drugs.

Another Australian Schapelle Corby returned home in May after spending 12 years in a Bali prison following her 2005 conviction for drug trafficking.