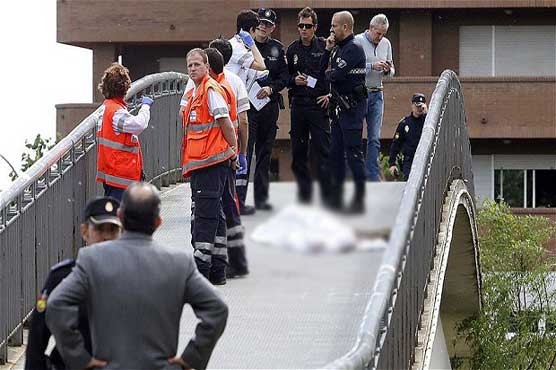 Isabel Carrasco, 59, a Popular Party leader of the Leon provincial council was shot dead on Monday.

MADRID (AFP) - A Spanish mother has confessed to gunning down a ruling-party politician in public in a long-planned act of personal vengeance that shocked the nation, a source close to the investigation told AFP on Wednesday.

Isabel Carrasco, 59, renowned as a strong character who was Popular Party leader of the Leon provincial council, was shot repeatedly in broad daylight Monday as she crossed a footbridge near her home in the northern city.

Prime Minister Mariano Rajoy and other leading Spanish politicians suspended European election campaigning and joined mourning for Carrasco before her funeral in Leon on Tuesday.

A 55-year-old mother and her 35-year-old daughter, who had recently lost a bitter employment-related dispute with the Leon provincial council, were detained by police shortly after the shooting.

"The mother has confessed to being the author of the killing and also confessed that she had been planning to commit such an act for two years," the source, who declined to be identified because a judge has imposed secrecy over the investigation, told AFP.

In a rapidly developing investigation, police said they had finally recovered the suspected murder weapon after it was handed in by a policewoman.

Officers had been searching in vain for the gun, including in the Bernesga river which runs under the bridge where Carrasco was shot.

"It was handed over at the national police station in Leon. The policewoman gave a statement there," he added.

The policewoman who handed in the weapon had been released after giving a statement but she, too, would have to face the judge as a suspect, he said.

"She had the weapon that was supposedly used to commit the killing," Cosido told a news conference.

"We are undertaking all the police scientific tests to obtain the optimum evidence so as to resolve from the police point of view a case that has shocked not only Leon but the whole of Spain," he said.

A source at Leon City Hall said the daughter s temporary job with the council had expired when someone else was chosen for the position in 2011.

But in addition to laying her off, the council then said it had mistakenly overpaid her 12,000 euros ($16,500) and wanted its money back. The council recently won a legal dispute, forcing her to return the funds, the source said.