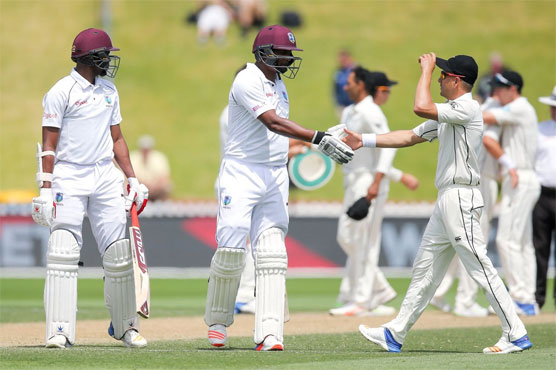 New Zealand beat the West Indies by an innings and 67 runs on the fourth day of the first Test.

WELLINGTON (AFP) - A dramatic West Indies batting collapse gave New Zealand victory by an innings and 67 runs in the first Test on the fourth day in Wellington on Monday.

The West Indies lost their last five wickets for just 33 runs in nine overs after lunch to give New Zealand victory with more than a day to spare.

The domination was set up by New Zealand winning the crucial toss and rolling the tourists for 134 on a green wicket before replying with 520 for nine declared as the pitch flattened out.

The West Indies resumed on Monday at 214 for two in their second innings, looking to knock off their 386-run deficit with minimal damage.

But the resistance ended with the loss of Kraigg Brathwaite for 91 inside the first hour as three wickets fell before lunch.

The wicket was no longer offering the bowlers any assistance but the fight had gone out of the West Indies, with the downward slide gathering pace from the first ball after the interval when Sunil Ambris was out.

Ambris, who made a golden duck when he stepped back on to his wicket in his debut first innings, made 18, including a six off Trent Boult, before being caught at first slip off Colin de Grandhomme.

It was the first wicket of the innings for man-of-the-match Wagner and he followed with the dismissal of Jason Holder (seven) to finish with nine for the match after his seven for 39 in the first innings.

The West Indies had started the day pinning their hopes on Brathwaite but he was the first to fall after adding 12 to his overnight 79.

After facing 221 balls, the most by any batsman in the Test, the West Indies opener was too slow bringing his bat down on a straight delivery from spinner Santner which rapped him on the pads, ending a 65-run stand with Shai Hope.

Nine overs later, Hope was also back in the pavilion for 37 when New Zealand took the second new ball and he edged Boult to the safe hands of Kane Williamson at gully.

Roston Chase fell to Matt Henry for 18 as the West Indies ended the morning having lost three for 72.

Henry, who is likely to be replaced by Tim Southee in the second Test in Hamilton starting on Saturday, finished with three for 57.