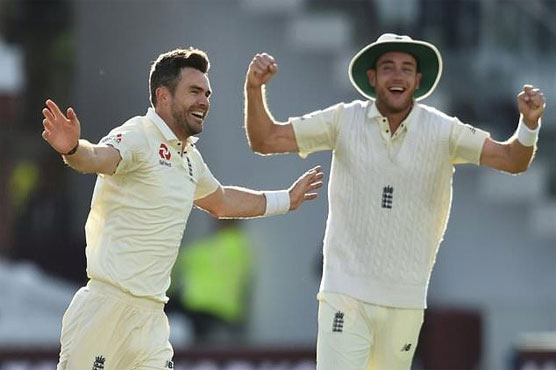 Second Test between England and Australia starts in Adelaide on Saturday.

ADELAIDE (AFP) - England aim to overcome mounting distractions and save their Ashes campaign against Australia through their potent pace duo James Anderson and Stuart Broad in the day-night Adelaide Test starting Saturday.

Diverted by the Jonny Bairstow-headbutt incident on top on the festering Ben Stokes availability saga, the tourists cannot afford another defeat after their 10-wicket first Test mauling in Brisbane.

A win in Adelaide looks essential to England s hopes of retaining the Ashes, especially with the third Test to follow at Perth s WACA Ground, where they have not won since 1978.

Bairstow s headbutt "greeting" of Australian opener Cameron Bancroft at the outset of the tour in Perth is the latest self-inflicted wound, leading to a midnight curfew imposed on the squad by team management.

The first-ever Ashes Test under lights has long been earmarked as England s best chance of a win in Australia given the extra swing and movement of the pink ball in the twilight conditions.

Anderson and Broad, with 899 Test wickets between them, will have to be on their game as England have not won or drawn a series in Australia after losing the first Test since 1954-55.

"We have a great opportunity in Adelaide to bounce back, the day-night Test match should suit our bowling attack and make sure we play as we did in Brisbane, but for longer periods of time," captain Joe Root said.

Australia have beaten New Zealand and South Africa in the two day-night Tests played in Adelaide, where the groundsman has to leave extra grass on the pitch to ensure the pink ball doesn t quickly deteriorate which may suit the English seamers.

"Jimmy Anderson, for one, will be in his element, Stuart Broad will get a bit of seam movement and if Chris Woakes will just pitch the ball up a little more then he could be dangerous," McGrath said.

"When the (Gabba) wicket quickened up we could go after them a bit harder," Lehmann said.

"That s the blueprint, it s no secret we re going to attack their middle and lower order like that. Hopefully that success continues."

Hazlewood has been Australia s most lethal bowler in the two pink-ball Tests in Adelaide with a total of 15 wickets.

England s Australian coach Trevor Bayliss is expecting more from his batsmen after collapses in Brisbane.

"Unfortunately, we ve been in this situation before over the last few years where we ve put in a bad performance but we were able to come back from it and I don t think it will be anything different on this occasion," Bayliss said.

Yet again England s big challenge will be to get Australian captain Steve Smith out cheaply, after his man-of-the-match Gabba performance.

It was Smith s Test-defining unbeaten 141 over eight-and-a-half hours that gave Australia a crucial 26-run first innings lead and switched the momentum to the home side,

"The Adelaide wicket might bring some of the bowlers into the game a little bit but, having said that, it s probably one of the quickest wickets in the country at night," Smith said.

"We saw how effective our bowlers could be when this wicket quickened up a little bit (in Brisbane), so that s exciting."