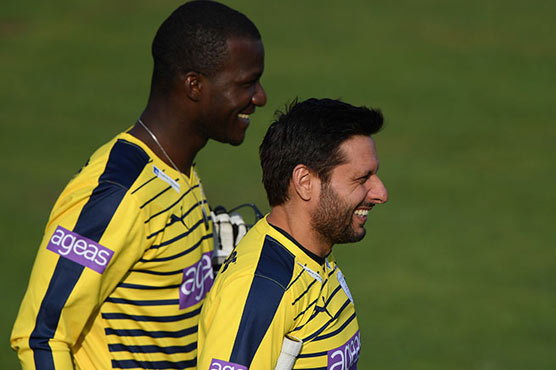 LAHORE (Dunya News) – The captain of PSL 2017 champions, Daren Sammy, reacted to Shahid Khan Afridi leaving Peshawar Zalmi. He said that he was shocked at the decision.

Was a pleasure playing with u buddy.. although I m in shock that you leaving...@JAfridi10 https://t.co/gSzy1E9Mxj

Not only the fans but Sammy too didn’t look pleased with him announcing an end to his services for Peshawar Zalmi as player and president. Afridi said that his decision was taken due to personal reasons, however, critics tell otherwise.

Sammy replied to Shahid Afridi’s message on Twitter and said, “Was a pleasure playing with you buddy. Although I m in shock that you are leaving… Shahid Afridi". However, Zalmi owner Javed Afridi and captain Sammy were both unaware of the matter.

Won d with 1 team,Time for another.Im announcing my end of service as president&player of PeshawarZalmi Team due to my personal reasons1/2

My best wishes with Peshawar Zalmi nd as far as my Peshawar fans r concerned I know they are with me wherever i go.

Peshawar Zalmi rose to victory in the PSL Lahore final under the leadership of Daren Sammy. Afridi had stepped down from Zalmi’s captaincy after the first edition of PSL in 2016.

Boom Boom tweeted saying, "My best wishes with Peshawar Zalmi and as far as my Peshawar fans are concerned I know they are with me wherever I go."